A meeting between President Donald Trump and House Speaker Nancy Pelosi went off the rails after Pelosi accused Trump of helping Russia, according to reports. 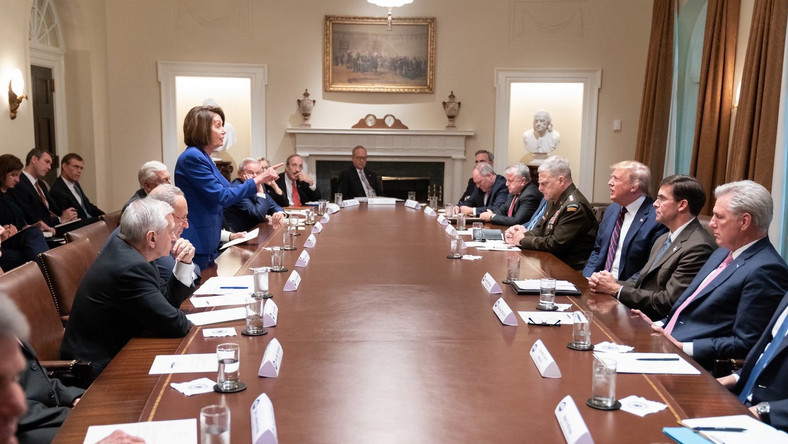 Trump’s meeting with Democrats about efforts to solve the new crisis in Syria reportedly went off the rails after Pelosi called out him out for helping Putin in the region by abruptly withdrawing US troops.

The meeting, between Democrats and White House officials on Wednesday, led to Pelosi walking out of the meeting and both Trump and Pelosi accusing each other of having a “meltdown.”

According to both The Associated Press and The New York Times , citing Democratic sources in the room, the already-tense meeting imploded after Pelosi noted that Russia has always wanted a “foothold in the Middle East” and that Trump’s unexpected withdrawal has given Russia what it wanted.

All roads with you lead to Putin,” Pelosi said, according to both outlets.

The AP reported that this was the moment the meeting fell apart.

Trump responded by saying: “I hate ISIS more than you do.”

Pelosi then responded: “You don’t know that,” both outlets reported.

And at one point, per the Times, Trump told Pelosi “You’re just a politician,” prompting her to hit back and say “Sometimes I wish you were.”

Trump’s sudden withdrawal has been widely criticized for appearing to abandon the Kurds US allies in the fight against ISIS and leaving them open to military assault from Turkey, leaving them likely to turn to Russia for help and thus giving Russia a stronghold in the region.

The chaotic nature of the meeting was evident from the conflicting accounts given by the two parties after leading Democrats left the room. When this happened, the AP reported, Trump said: “Goodbye, we’ll see you at the polls.”

Schumer said the meeting was “not a dialogue. It was sort of a diatribe, a nasty diatribe.”

Pelosi said that Trump was “shaken” in the meeting because it took place after the House voted overwhelmingly to condemn Trump’s actions in Syria, according to The Hill .

READ  ‘Linguistics is in everything’ from astronomy to everyday life, says this linguist from Trinidad & Tobago

“That’s why we couldn’t continue in the meeting because he just wasn’t relating to the reality of it,” she said. “What we witnessed on the part of the president was a meltdown, sad to say.”

Trump tweeted a photo of the empty chairs after the Democrats left, calling them “Do Nothing Democrats.”

White House Press Secretary Stephanie Grisham said that Trump “was measured, factual and decisive, while Speaker Pelosi’s decision to walk out was baffling, but not surprising.”

Trump later tweeted an official White House photo of the meeting, which shows Pelosi standing and pointing at Trump, while he appears to be talking. He captioned it as “Nervous Nancy’s unhinged meltdown!”. Pelosi then made it her cover photo on Twitter .

Trump later tweeted a photo of Pelosi and Schumer during the meeting, captioning it: “Do you think they like me?”

The 9 most important unanswered questions about Covid-19